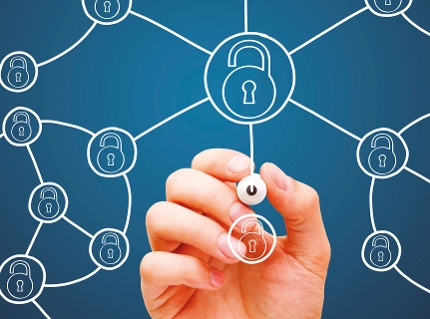 On Monday, June 26, the Netherlands Research Council (NWO) announced that they will terminate the Incentive Fund Open Access on January 1, 2018.[1] NWO started this Incentive Fund in 2010 to finance open access publications and activities that highlight open access during scientific conferences.

The fund has been useful for advancing open access since it became available in 2010. However, this decision soon follows the launch of the National Plan Open Science (NPOS)[2], signed by NWO, early 2017. In this plan institutions commit themselves explicitly to work on a healthy open access climate to achieve 100% open access for researchers affiliated to Dutch research universities. Now it’s obvious that this fund is not going to be the solution. However, it’s a remarkable step especially now. There is still a lot to do.

The choice is unfortunate, the more because NWO has been one of the first national research councils in Europe with an active open access policy and, moreover, a well-funded program from which APCs (and BPCs) could be paid, provided that the research will be available immediately after publication (the Gold route). On a national level NWO and the Austrian Science Fund (FWF) were the first funding bodies to mandate books and allocate money for BPCs. This policy is therefore quite unique, and only in the last three years or so, it’s under development at other places.

The Incentive Fund was founded with the aim to stimulate Gold open access. NWO hoped that with such a fund, this could be a model that universities would take over; individual institutions should bear the cost of open access with their own budgets. This has hardly come to fruition. Only the University of Amsterdam, Utrecht University, Delft University of Technology, and Wageningen University & Research have had such funds. At this very moment only Utrecht still runs an Open Access fund.

It is absolutely fair to ask why NWO should keep on spending money if it turns out that universities seem to find this step difficult. But now the boy scout decides to throw in the towel. Understandable, but disappointing. There are enough pros (and yes, cons as well) to consider.

In this piece, I would like to give some considerations why it would not (or would) be wise to terminate this fund. I take the arguments that NWO puts forward[3]:

“NWO believes that the academic world is now sufficiently aware of open access publishing and its importance.”

I doubt this very much. The debate on open access has so far been predominantly conducted by policy makers, libraries, and publishers. Researchers often submit their articles to the established and renowned, usually high-impact, journals. This (imposed) culture does not necessarily lead to more articles in open access journals. And yes, there are many researchers who are aware or the benefits of open access and publish their work in open access, but to say that this is ‘sufficiently’? The ‘academic world’ is any case an international one.

True, enormous steps have been taken over the past 20 years. Lots of journals made the transfer to open access. There are (commercial and non-profit) platforms for articles, preprints, post prints – you name it. But are these all for free?

In addition, the OA Big Deals only cover a part of all the Dutch open access publications in journals. At the moment, as academic community, we are trying to get more insight into this.

Not to mention the diversity of the deals. At Elsevier, it is possible to publish in 276 journals for ‘free’. All other (1800+) are still paid for. It is therefore nonsense to think that there are enough channels for researchers to publish their research in open access? I want to stress here that I don’t want to say that the APC-model is the holy-grail. Far from. But it’s the reality with which researchers are faced.

“Finally, there is the green route, which authors can use to deposit their articles in a (university) repository at no cost.”

Yes correct. And we have repositories for every university for more than 10 years. With varying success. However, for the time being, the government has also been advocating open access through the Golden route (i.e. via journals) since 2013 and above all stating that it is the most future-proof. Not in the last place by the VSNU.[5] For NWO, the Golden route has always been the main goal. In addition, NWO demands immediate open access (without embargo period). This is hardly possible with Green (self-archiving) open access unless NWO wants to force researchers to publish the preprint without peer review? Apparently, they have revised their own terms and policy. This can happen of course, but I find it strange to argue that a fund aimed at publishing in journals needs to be terminated when Gold is the standard.

You could also argue that this fund leads to pushing more money in the (publishing) system. Then I’d like to say, let’s do better with the national deals and not only focus on hybrid journals.

In addition, there is the already mentioned National Open Science Program (NPOS). This plan focuses on three key areas, which are: 1. Promoting open access to scientific publications (open access). 2. Promoting optimal use and reuse or research data. 3. Adapting evaluation and award systems to bring them into line with the objectives of open science (reward systems).

One of the ambitions is full open access to publications. As stated:

“The ambition of the Netherlands is to achieve full open access in 2020. The principle that publicly funded research results should also be publicly available at no extra cost is paramount. Until the ambition of full open access to publications in the Netherlands and beyond is achieved, access to scientific information will be limited for the majority of society.”[6]

In this transition phase. And with this, NWO supported, ambition in mind, the termination of a transit fund (this is how it should be seen) seems a bit premature to me. However, it should be said that the possibility remains to budget open access publications in project funding at NWO. But it is to be seen for how long this will happen considering their response: ‘for the time being’. 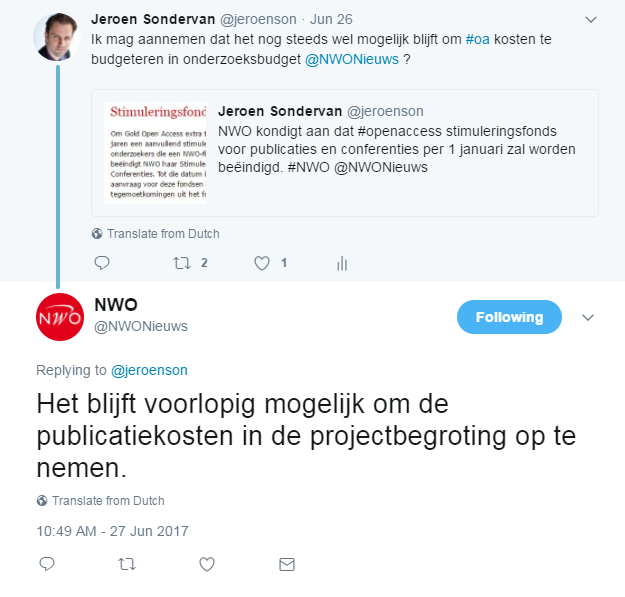 This post has been posted in Dutch online journal Scienceguide Friday, June 30.