Open Access and the Issue of Quality: Beall or not to Beall 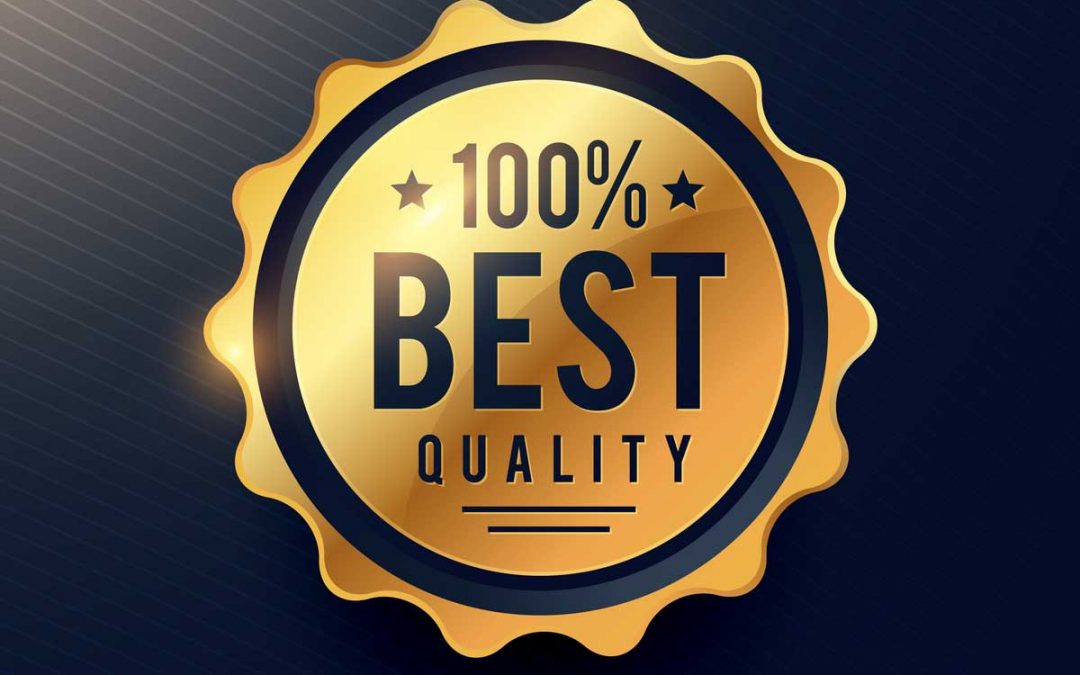 Like everywhere else where money can be earned, also in the field of open access publishing there are pirates around. In the past 10 to 15 years, there have been many parties that abused the open access publishing model – in which the author must pay for the publication of his / her article, for the sole purpose of making money. These ‘publishers’ ask an Article Publication Charge (APC) for vague platforms or journals with a questionable or often non-existent reputation.

I’ve written about the Jeffrey Beall’s list before in Dutch here and eventually I wasn’t planning to write about his endeavors anymore, since it has been discussed a lot in the last few years. It’s a blacklist and for some it works as a point of reference, and for some it is only a biased view by one person; Jeffrey Beall himself.

Because the issues of academic quality in relation to open access almost always pops up in discussions about scholarly publishing I thought it still might serve the media studies community anyway to give some more context to this debate.

Since 2008 Jeffrey Beall, librarian at the Auraria Library, University of Colorado Denver, has been engaging with the quality issues of open access journals. In 2010 he began to draw up a list (the Beall’s List) of so-called “predatory journals.[1] Publishers / journals featured as ‘predatory’ are often identified by aggressive marketing strategies (spam) mailings and calls to submit an article for a journal that after a critical review is no more than a hollow vessel. The Beall’s List has been able to build the necessary authority in recent years, and rightly so in some extent.

But since his list acquired a lot of both positive and negative attention in the last 8 years, and it gained a certain amount of prestige as being the one and only curated list of ‘malpractice’ in the landscape of open access journals, it is newsworthy that only two days ago the Beall’s list suddenly got offline and all activities related to his blog seem to be erased from the internet (if that is ever possible anyway). Up till now it’s unclear why this has happened and one can only speculate about the reasons behind it.

Beall was one of the first to systematically map the abuses in open access journal publishing. He also formulated criteria, by which he assesses the journals and publishers. These criteria are published online, and up to last week he constantly provided updates to it. Beall writes in this document (latest version 2015 ):

But a growing amount of criticism to his work has appeared in the past two or three years. For example, it was not always clear why a publisher or journal made it to his list. Beall almost always made such a decision by himself, without having a clear and visible procedure for the outside world to judge. Transparency is an obvious problem; exactly what he is trying to denounce in the above quote.

It turns out that there is almost never ‘back-channel feedback, or if it is there, it is not often made public.

As the publisher, Frontiers, in October 2015 made it to the Beall’s list: 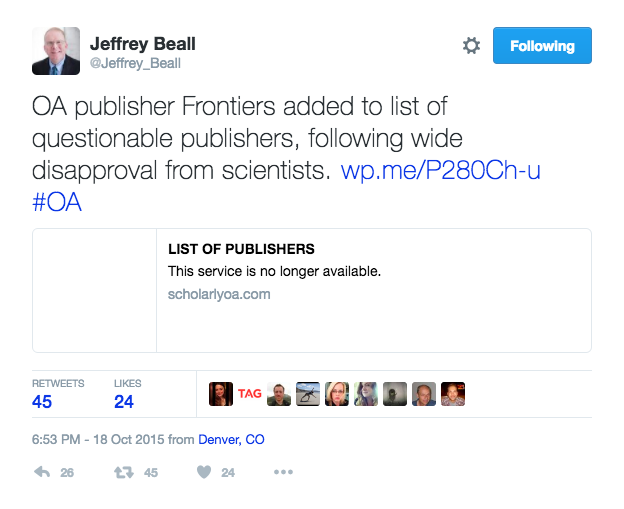 A huge online discussion started to get to know the rationale behind this decision. Many academics (who at that time also were partly involved as an editor at Frontiers) fell over this decision.[3] It would be too one-sided, would place too much emphasis on what is not going well in the editorial processes, etc.. Moreover, Beall had issued a warning in 2013, but this has been quite brief. But, with this brief announcement his action came not completely out of nowhere.[4] Despite the comments in favor of Frontiers, the publisher has taken steps to improve certain editorial processes. Beall’s action has therefore indeed lead to action/reaction, whether it is justified or not.

One thing is clear and that is that there is much to do about the list itself. There has been a formal accusation submitted by a publisher who thought that it was unlawfully added to the Beall’s list.[5] Recently some people even suggested that Beall would ask for money in order to do an assessments to get a journal or publisher off the list.[6] It is difficult to really determine the authenticity of such an allegation and we should therefore be careful about it. In the last few years some fanatics began a crusade against everything Jeffrey Beall is doing.[7] Even bullying him. And maybe this, as we’ve seen just this week has apparently lead to the end of his blog? Anyway, such practices, however, contribute nothing to the search for a workable (global) system where we can separate the bad apples from the healthy fruit.

We must not forget that even in the ‘old’ world of traditional (closed access) publishing, there were (and still are) rotten apples in the fruit basket. For several years Beall has increasingly positioned himself  in the opposite camp of open access. That in itself is not wrong, but since there always has been a lack of transparency, he undermined his (hopefully) good intentions.

So, he, like any other person or company who claims authority, needed to be held under a magnifying glass constantly. However, it does not make sense to put his work on the list completely sidetracked. Despite his, sometimes very negative, statements about open access, he ensured that we have to have a critical stance towards the quality of open access publishing, and more specifically the revenue models that come with it. The fact that at this time the focus is on pay-to-publish (APC-driven), it means that there needs to be a careful consideration how we can ensure quality without letting the financial incentives prevail. Moreover, the financial incentive in the old subscription model has always been very decisive. It is not for nothing that the big publishers continually defend’their’ citation indexes and impact factors with tooth and nail…

First, the Directory of Open Access Journals (DOAJ) greatly aggravated its access requirements in the past two years. A journal must meet a set of requirements to be admitted to the index. If a journal is indexed in the DOAJ, one can assume that it is a decent journal and that it meets the technical (infrastructure, storage, distribution) requirements and industry standards. How editorial boards are formed and whether the output is relevant to the field, remains a matter between scholars themselves.

In the Netherlands the Quality Open Access Market website launched in 2014. By inviting the academic community to provide an assessment for open access journals  (so-called journal scorecards), they aim for a balanced review coming from the community itself. An addition to the review is that the website mentions whether there is an APC applicable, and if so, what costs are involved. Something can be said about the value-for-money of those open access journals.

QOAM makes use of the metadata database of the DOAJ. QOAM is heavenly depending on the contributions from the academic world as in scholars are asked to crowd-source the database. Until now, it seems, there is not enough critical mass of reviews in order to provide a complete overview. 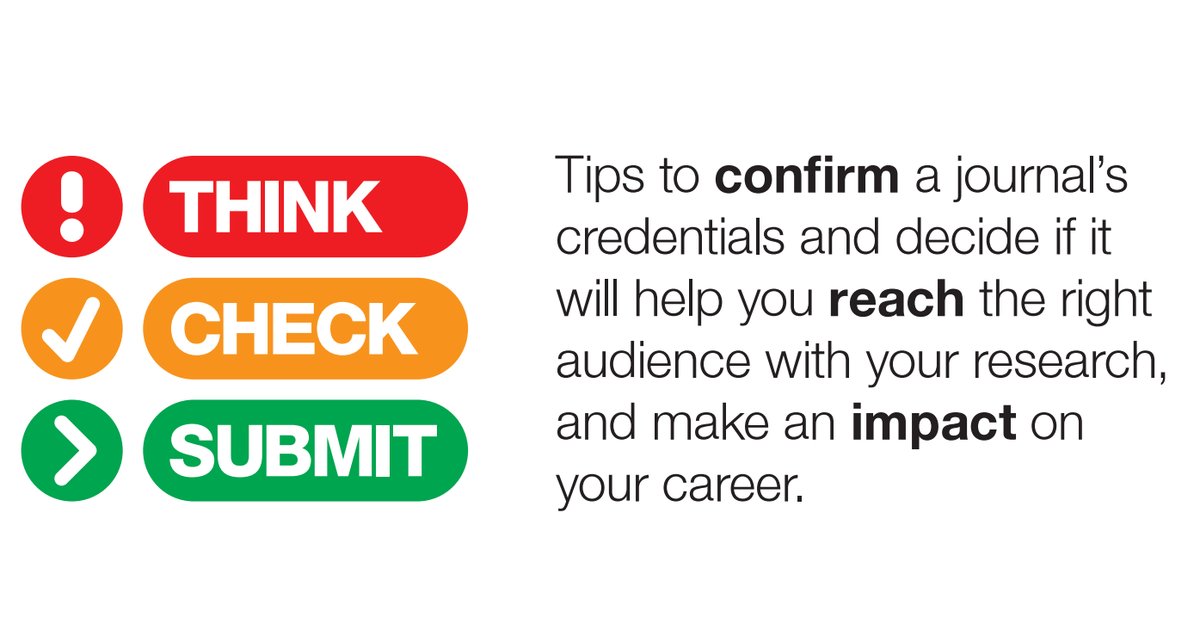 The Think CheckSubmit website was presented in September 2015, and it’s supported by the OASPA | Open Access Scholarly Publishers Association. The aim of this website is to create awareness among scholars about open access journals and their quality. What are the important aspects that reflect quality? What is important for a proper distribution of your publication? And is the journal doing what it promises? By submitting a series of answers to specific questions, a researcher can evaluate the open access journal.

DOAJ is around for a long time now. The last two mentioned websites above are fairly new initiatives, but one can also search in existing systems, like Scopus and the Web of Science. Open access journals are indexed in those systems for a number of years now. These journals must meet high standards and will not simply appear in these indices.

So, to conclude, there are different roads leading to Rome when it comes to assessing whether a journal has quality or not. Many university pages and open access advocacy websites worldwide do mention Beall’s list as the place to separate the wheat from the chaff. And the advice is to avoid (most of) these open access journals or publishers. But we must realize that this is only an advise. For example, the publisher Multidisciplinary Digital Publishing Institute (MDPI) got on the Beall list in 2014, but several Dutch universities have an open access publishing deal with MDPI anyway.[8]

As a result of this weeks closure (an archived webpage can still be accessed) of Beall’s blog those university pages need to be updated soon I guess.

Update January 19, 7:32pm: I just came across this post in the Inside Higher Education where they say Jeffrey Beall declined to comment on the removal of his website.

[8] For a more extensive comment about the addition of MDPI: https://en.wikipedia.org/wiki/MDPI#Inclusion_in_Beall.27s_list (accessed May 2nd 2016).