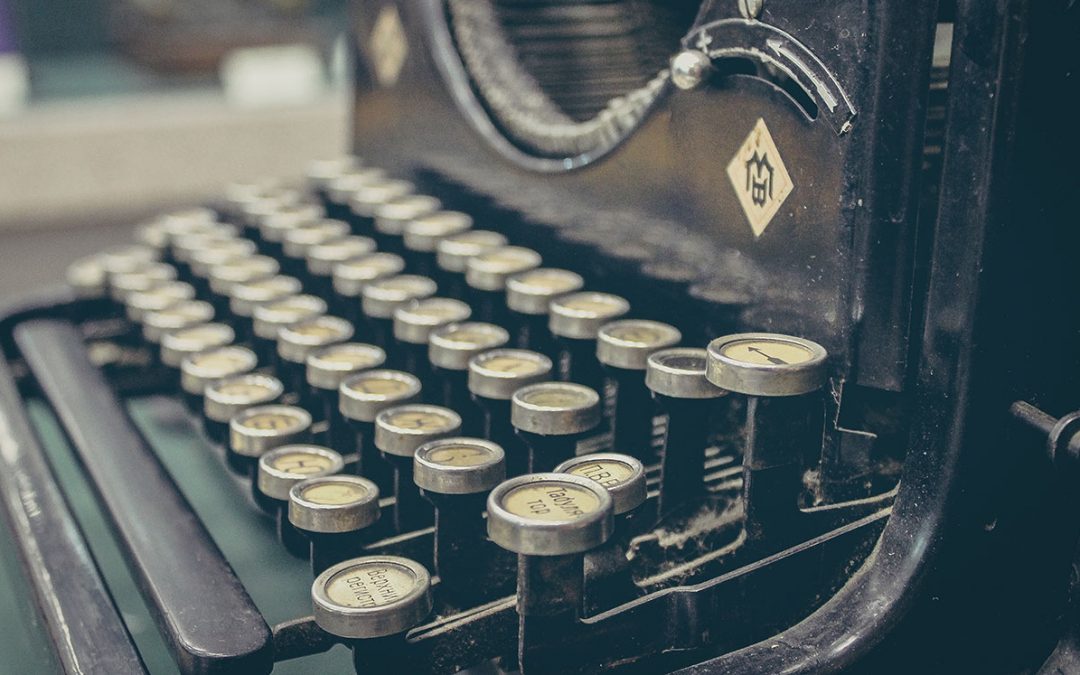 When it comes to open access, often the emphasis in the debate centres on the publication of articles in scientific journals. Today in the Netherlands this is heavily influenced by ongoing negotiations around the ‘big deals’ with the large publishing houses, like Elsevier, Springer and Taylor & Francis.[1] But what is the status of open access for the academic ‘book’ (whether monograph or collections of thematic articles)?

A few months ago it was announced that the tender for the second pilot of Knowledge Unlatched (KU) had been successfully completed.[2] This effectively means that in the course of 2016, 78 books in the OAPEN open access platform will appear in the KU online library.

One step back. As mentioned above, the open access debate is dominated by journals. In recent years, many new online-only journals have appeared on the market, for example PlosOne. These online platforms gather large collections of articles from different disciplines. Although the oft-used term ‘mega-journals’ is a bit discredited for such platforms nowadays, it’s all a matter of volume and scale for these initiatives.

In addition to publishing platforms like PlosOne, or similar platforms set up by more traditional publishers (like the recently launched Collabra from California University Press, four ‘platform’ journals at Brill, the ‘Open’ journals at De Gruyter and the recently established Elsevier Heliyon), many publishing startups are flourishing. These ‘new kids on the block’ do not carry the burden of old and costly organizational and publishing traditions. These startups experiment with publishing formats, new forms of peer review, and interesting combinations made with (open) research data. Examples of such platforms are Peerj, Frontiers, the recently launched Open Library of Humanities and F1000research, which in fact is a bit older.[3] It is clear that within the journal landscape online experiments are happening one after another.

But, when it comes to open access publications, there is more to it than just publishing in journals. And that is books. They’re less visible in the debate, which is strange since in barely five years some small but significant developments have taken place for the academic book – traditionally the domain dominated by the humanities and social sciences. An example is the previously mentioned OAPEN platform. The FP7 project OAPEN project funded by the EU (duration: 2008-2011) was one of the first projects in the field of accessibility and long-term storage for open access books. Since that start-up support, the platform has transformed into an independent foundation with several publishing houses registered and adding books to the collection on a regular base. This has had a positive effect for the discoverability of open access books.

What is the situation today?

Established publishers are also moving towards new publishing forms. Examples of publishers with an active open access publishing book program include California University Press, Springer, Amsterdam University Press, Brill and De Gruyter. There are numerous new entrants, such as Open Humanities Press and Ubiquity Press. These publishers in the humanities and social sciences show a shift to an alternative model for book publishing in open access. This shift is also seen in the ever-growing availability of open access books in online databases or institutional deposit services (such as OAPEN), even if the totals are currently very low. In 2015 an estimated 65,000 academic books were published that year[4] but only 700 books were registered as open access and indexed in the Directory of Open Access Books, the book alternative to the Directory of Open Access Journals (DOAJ) which was established following the OAPEN platform. 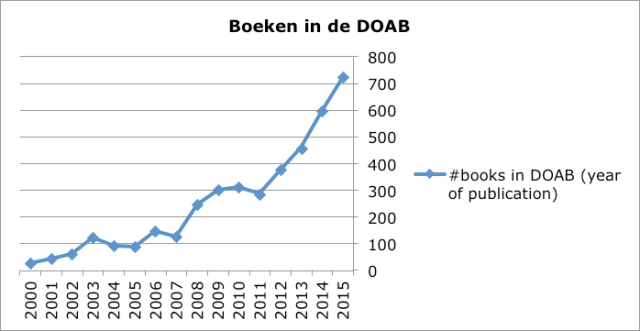 DOAB obviously does not index every open access books, but the share of open access books remains small as a percentage of the total. The DOAB service started in 2012 and contains many backlist titles from publishers indexed in the first period that became available in open access. Figure 1 clearly shows that from that year a significant increase occurs in open access books. These books have become freely available immediately or after a short embargo period.

Even if academic books are not absent from the open access world, a proactive policy for publishing and financing such monographs and essay collections is still in its infancy. At this time, DOAB has more than 4,500 books available online, deriving from 150 publishers worldwide.

Figure 2: Amount of publications (blue) and publishers (red) in the Directory of Open Access Books (DOAB).

To get a better grasp of the processes around the publication of open access books, several recent pilots in the Netherlands and the United Kingdom have been organized around the OAPEN platform (OAPEN.NL and OAPEN.UK). Both pilots have developed extensive user studies and a lot of research has been done into the cost structure of open access books. Working together with publishers from the countries concerned was essential to gain a clear understanding of the publishing process (peer review and dissemination costs). Recently, a similar pilot project has been launched in Switzerland (OAPEN-CH). The results from all these pilot projects will hopefully inform wise policy decisions.

Another initiative to develop a healthy stream of open access books is the aforementioned Knowledge Unlatched project. In 2013-2014 KU launched a first pilot to offer a collection of 28 open access books by thirteen different publishers to research libraries. The model assumes that, with upfront commitments from libraries, significant cost savings can accrue per subscribing library. With sufficient bids (the threshold is around 300 libraries) books are then made available through OAPEN. At the end of 2015, a second pilot was presented with a collection of 78 books. Libraries had until February 2016 to register for this book collection. This pilot was also successful and in the course of 2016 78 books will be published in open access.[5] This KU-model makes a large collection of books available in open access within a rapid turn-round time. Some commentators argue that Knowledge Unlatched is a case of double-dipping. KU seems aware of this criticism and has agreed with the participating publishers that a reduction or waiver is used when the library indicates that a specific book is already ordered through another channel. This does require notification by the libraries, however.[6]

Significant challenges for open access books remain. For instance, in the current Research Excellence Framework (REF) in the UK, which covers the four-year period from 2015 until 2018 open-access-only books are not eligible for evaluation. Besides printed publishing formats only open access articles are eligible for the ratings of researchers. The REF determines the distribution of a great proportion of research funding. Ergo, an opportunity for a more structured form of financing of open access books in the UK is yet to be developed.

Also, in the UK, the HEFCE Open Access Monographs project was completed by Prof. Crossick. This evaluated the potential merits and challenges of open access for the scholarly monograph. This report complements the earlier Finch Report from 2012, where books were barely mentioned.[7] Its January 2015 report offered some important conclusions. For example, among others:

“Contrary to many perceptions, it would not be appropriate to talk of a crisis of the monograph; this does not mean that monographs are not facing challenges, but the arguments for open access would appear to be for broader and more positive reasons than solving some supposed crisis.”[8]

A ‘crisis’ might be too dramatic, but the fact that scholarly book publishing is in difficult and turbulent times, seems hard to deny. Sales of books on paper have been in steady decline since the 1980s.[9] Libraries are increasingly embracing the e-book and there seems a clear decline in the acquisition of the physical book by libraries. Crossick seems to require open access to be the sole answer this ‘crisis’ feeling, but it surely can simply be one contributor to a solution.[10]

The report also concludes that readers prefer printed books over the digital version. This should not be underestimated and would argue for the open access version to be subordinate to the print edition, which would not need to disappear.[11]

The continuing preference for printed books is confirmed by several studies and practice. Almost all publishers that have an open access publishing model for books use a ‘mixed model’ of online and print (+ e-book). In the OAPEN-UK pilot a survey among researchers examined the use of books.[12] By far the majority still prefer the paper book. 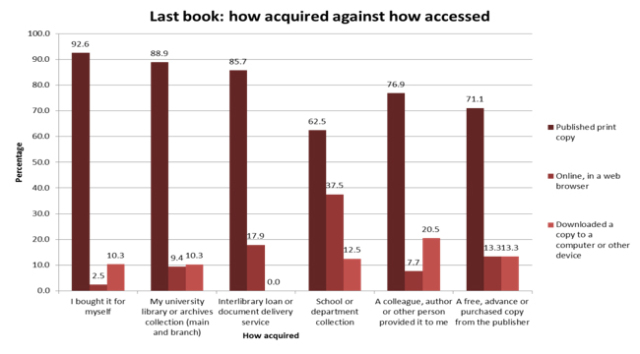 Figure 3: Survey on how researchers obtain a book versus how they got access. Source: OAPEN-UK Research Survey in 2012.

The HEFCE report also indicates that there is currently no single dominant model for open access books. All existing open access publishing models are still in a (sometimes very) experimental phase.[13] These models include fees per book (Book Publication Charge – BPC), charges by collections (Knowledge Unlatched), or simply just do it and hope for some income from the print edition (an example is Open Humanities Press).

When it comes to policy-makers and research funders the HEFCE report states:

“Policy will have to be developed in a context where it is unlikely that any one model for open access will emerge as dominant, and one in which an attempt to impose a single model through policy is unlikely to be feasible, let alone acceptable.”[14]

By contrast Austria has been active for almost a decade in funding open access books. The national research council there, the FWF, has been active since 2007 with an open access policy and appropriate financial support. Austrian researchers receive a subvention for costs in publishing books in open access.[15] This practice is now beginning to spread.[16]

Likewise, the Dutch Research Council, NWO, launched in 2010 the Incentive Fund for Open Access. This grew, following the successful results from the OAPEN-NL pilot mentioned before. And the University of Utrecht and Delft University both offer funds for open access books.

All these developments should hopefully lead to more examples of best practice and successes. The various studies referred to above have also led to two recent guides on book publishing in open access: the ‘Guide to Open Access monograph publishing for arts, humanities and social science researchers’[17] published by the OAPEN-UK pilot group and the ‘Open Access Monographs and Book Chapters: A practical guide for publishers’[18], published in July 2015 by the Wellcome Trust.

These manuals are intended to give the user a clear why and how? What editorial and technical issues must be taken into account? What are the different publishing models? Using research results gained in the various aforementioned pilots this has led to concrete recommendations not only for publishers, but also policymakers.

Many publishers in the humanities and social sciences are shifting in the direction of, or at least reorienting themselves towards, open access for books. But these developments are slow. There is currently too much risk of failure when it comes to for example the funding on both the side of publishers and researchers. We await more solid results from different open access publishing models. The traditional book on paper (still) matters but for the scholarly monograph open access increasingly offers wider and more efficient ways of distribution. It’s not either/or, but one and one makes two.

[1] In 2014 universities in the Netherlands demanded open access in the contracts (‘big deals’) with major publishers (Elsevier, Springer, Wiley, Taylor & Francis, etc.). These negotiations only deal with journal articles.

[3] This is obviously a limited selection. There are many other examples.

[4] These figures are drawn from the annual statements of YBP Library Services.